I joke a lot about training to be a mud doctor because I study muddy sediment in my PhD research. But that comparison isn’t just a play on words. Just like a “real” doctor takes x-rays to diagnose you and bandages you up to keep your innards from falling out, I collect mud samples, bandage them up with electrical tape so that nothing falls apart, and then x-ray those samples to diagnose the environment’s sediment dynamics. So how exactly does a mud doctor read the muddy sediment record like a story of the past? Let me tell you with a story.

Act I: I traveled to Bragança, a tiny Brazilian coastal town just south of the Amazon River, with a group of eccentric mud doctors and mud doctors in training. 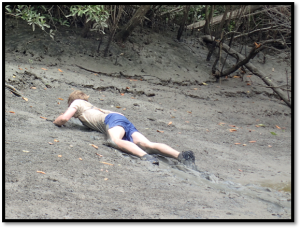 Act 2: To diagnose the bewildering mud, we first had to get as close as we could by boat and then approach it on foot. This was trickier than it sounds. The best kind of mud is that soupy, stinky stuff that slowly sucks you into its depths if you naively try to walk across it.  We found the tummy slither to be an efficient mode of transportation.

Act 3: We collected our muddy samples in Plexiglas trays. These trays are basically just long rectangular tubes. To collect our samples in these trays, we shoved them deep into the ground to trap a slice of mud inside the tube, then plunged our arms even deeper into the mud to grab the trays by their bottom and yank them out of ground, all the while fighting off life-sucking mosquitoes and trying to not accidentally inhale the mud or sink in beyond escape (notice my legs sinking farther and farther into the mud in these shots).

Act 4: After heroically fighting off the lethal mosquitoes and muddy quagmire, we quickly bandaged up our specimen by wrapping electrical tape round and round the edges of the tray so that no mud could shift around or fall out, effectively preserving a slice of muddy history. Then we posed proudly for a picture with our bounty still in its natural environment and slithered back to the boat backstroke style. 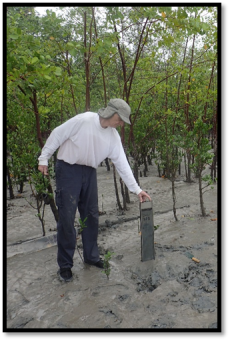 Act 5: Next came the really cool part, taking x-rays of our samples. Different environments preserve different types of sediment. And different types of sediment have different densities. So a slice of land that has been formed by many different environments through time will have layers of sediment with different densities. It’s pretty hard to see these layers with the naked eye, but you can capture these layers in an x-ray. Just like a medical doctor’s x-ray distinguishes between bones (high density) and flesh (low density), a mud doctor’s x-ray distinguishes between layers of sand (high density) and layers of mud (low density). So we taped some film to the back of our trays and set them in front of a portable x-ray machine, the blue and

white box with lots of dials and cords in this photo (this is the same machine a traveling veterinarian would use). We then placed a barrier of protective lead between us and the x-ray source as any safe doctor would do, and shot wave after wave of x-rays at our sample, burning the film behind the easily-penetrable, low-density mud (turning the white film to black) and leaving the film behind the higher density sand pristine white.

Act 6: Finally, we covered up the windows in our hotel bathroom to make a darkroom and developed our film in the shower. And whala! The history of these muddy environments was written onto readable film. Just look at the beautiful specimen below!

We see thin layers of alternating 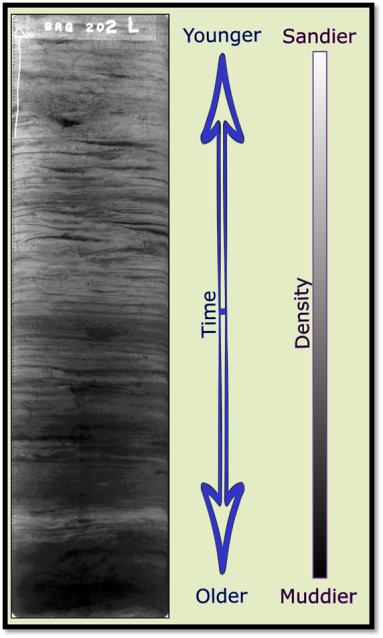 And with that trip to Brazil and a lesson in reading a muddy environment, I took one step closer to being a real mud doctor.

View all posts by robinmclachlan