Mangrove forests occupy a unique ecological niche in inter-tidal zones of the world’s tropics and subtropics, and their extent and health have important implications for both science and policy. In the conterminous United States, these warm temperature- and saltwater- loving trees only grow in three states: Texas, Louisiana, and Florida. However, these forests are highly dynamic, and their extent can shift, expand, and contract over time if they are impacted by forces such as climate change, sea-level rise, more/less sedimentation, fire, and human construction. Knowing exactly how mangrove forests grow and migrate in the face of climate change will allow scientists to predict whether this unique species can withstand and recover from future sea-level rise and more extreme storms. 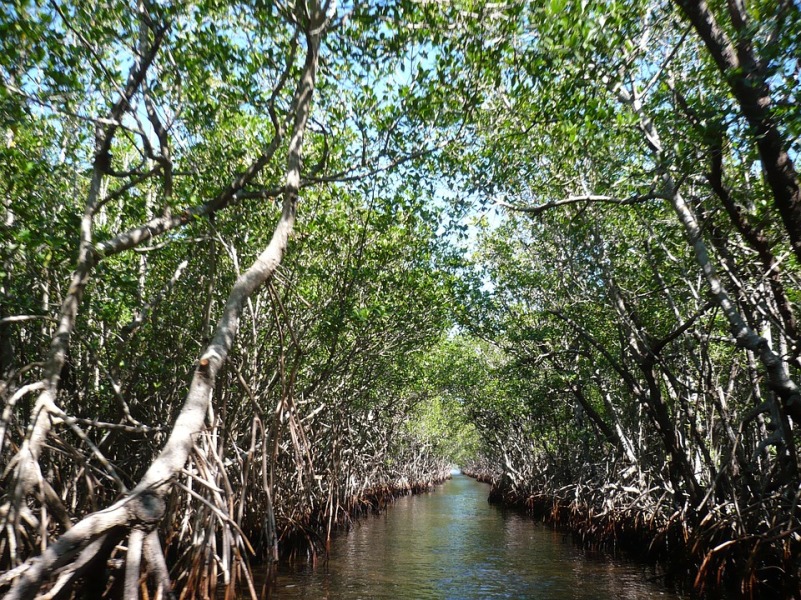 Mangroves like these grow along inter-tidal zones in Texas, Louisiana, and Florida. This picture was taken in Florida’s beautiful Everglades.

Many scientists believe that mangroves in the U.S. are presently moving both inland as they retreat away from rising sea levels as well as northward into areas where climate change has lessened the frequency and severity of cold weather snaps. But, historical data doesn’t reach back more than a few decades so it’s almost impossible to know if these trends are long-term constants or if they are just artifacts of short-term local events. Scientists from the EPA (Environmental Protection Agency) and USGS (United States Geological Survey) took on the challenge to weigh in on this question: Is the geographic range of mangrove forests in the conterminous United States really expanding? Their answer: Yes, but not as much as originally thought and more so due to local than universal events.

These scientists analyzed ~35 years’ worth of satellite imagery, aerial photography, and field data to track mangrove forests in the U.S. over the past several decades. They found that from 1980 to 2015 the total area colonized by mangroves increased by 4.3%, but none of the forests had systematically expanded northward. Instead, the increase in extent was caused by mangroves migrating inland. 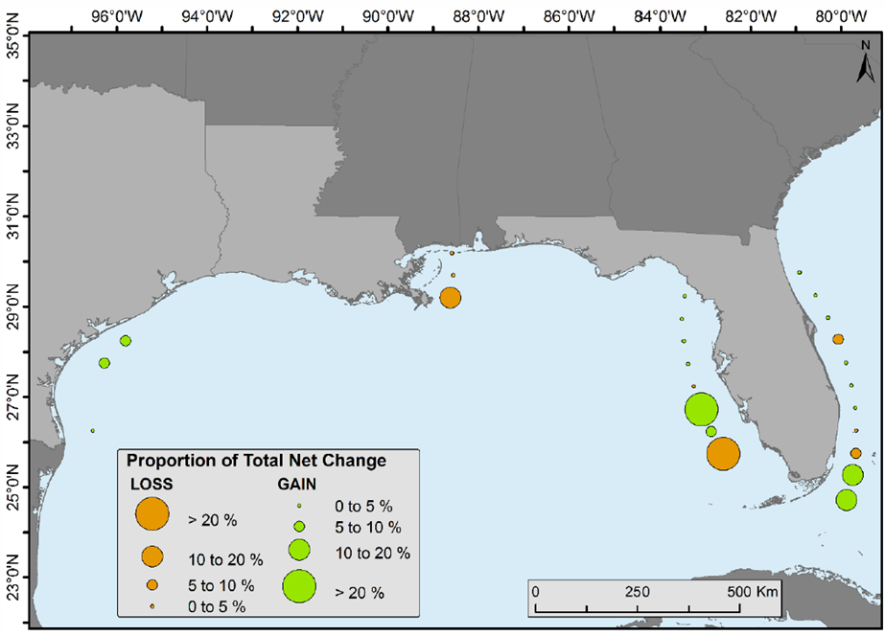 Map of the change in proportion of total mangrove forest cover from 1980 to 2015. Image from Giri and Long (2016). Creative Commons Attribution License (CC BY).

Factors responsible for forcing mangroves inland were complex and site specific. For example, in eastern Florida, mangroves are migrating landward for two reasons: 1) milder winters and 2) land management by humans. In the 1940-1960s, humans built mosquito impoundments that cut off circulation of saltwater to mangroves and killed 76% of the forests. New techniques implemented in the 1980s have allowed tidal saltwater to recirculate through the forests allowing them to rebound back. Also, dredge spoils (marine sediment brought up from estuarine beds and dumped onto land) have historically blanketed potential mangrove habitat. In the most extensively human-influenced areas, man-made ditches and dredge spoils overtook up to 80% of natural mangrove habitat. Rehabilitation of these areas began in 1999.

Inland migration of mangrove forests has intriguing implications for coastal management and the well-being of coastal communities. Extensive coastal areas around the Gulf of Mexico are losing ground as the land subsides beneath rising sea levels (learn more about that in these previous posts: #1 #2). The expansion of mangroves may help combat the loss of land because they trap more sediment than the salt marshes they replace, thus building up the land level and preserving coastal area and habitat. 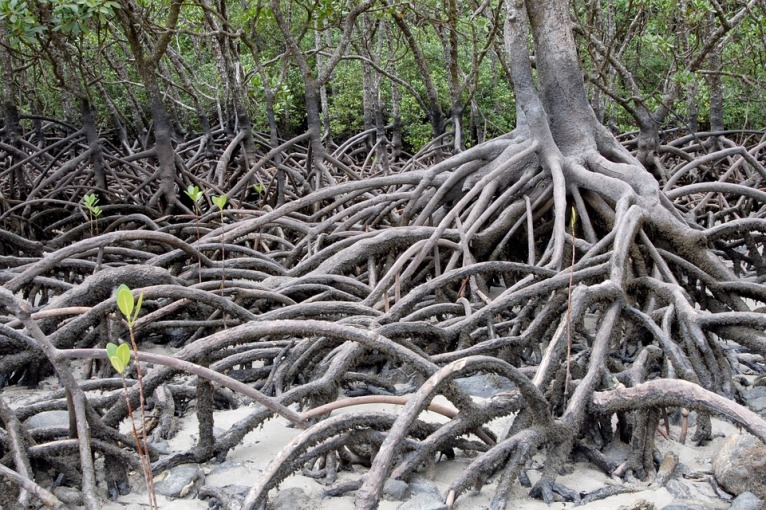 Mangroves have prop roots and pneumatophores that extend above the ground, trap sediment, and build up the elevation of the forest floor.

This study successfully tracked mangroves over the past 35 years. However, the researchers admit that even this undertaking was not adequate to fully assess the vulnerability of mangroves to universal, long term climate change. This new mangrove assessment did succeed, though, at laying a cornerstone for mangrove research that will serve as a benchmark to monitor impacts of climate change on mangrove forests in the future. Only time will tell how resilient mangrove forests and coastal regions can continue to be.

This post was originally written for OpenScienceDB, to help accomplish their goal of bridging “the communication gap between research labs and the public by creating a centralized database of important scientific research taking place around the world.”

View all posts by robinmclachlan